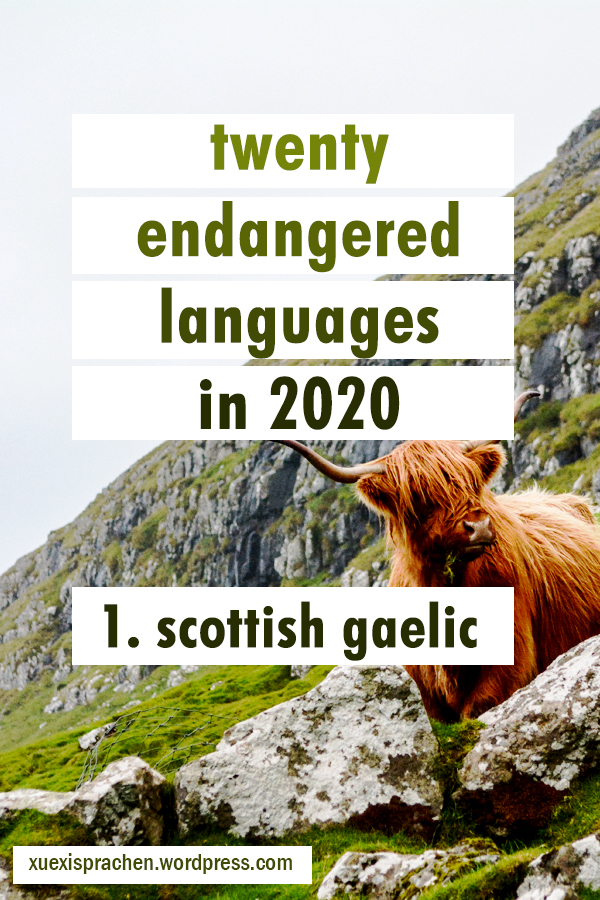 Scottish Gaelic is the first of the twenty endangered languages I’ll be spending time learning this year. It’s also going to be one I keep learning all year, so I’m excited to get my teeth into it!

What is Scottish Gaelic?

Scottish Gaelic is a Celtic language that developed from Old Irish sometime around the 13th century. Today, it is spoken by around 50,000 people and there are serious efforts being put into its revitalisation in Scotland, such as Gaelic-medium schools and bilingual signage.

Why did I choose Scottish Gaelic?

Mostly because I wanted to learn it, though I’m also covering all the remaining UK-based indigenous languages this year as they’re all endangered because of English. Also while Scottish Gaelic is not a heritage language as such for me, half of my family is Scottish, so it’s interesting to try and connect with the indigenous language and culture.

What can I expect to achieve in 18 days?

I’m not going to lie; I did a little bit of Gaelic before 2020 because Duolingo released their course, but also because I’d dabbled in it before—that’s how I knew I wanted to make it a full-time language this year.

I am hoping to make it most of the way through the Teach Yourself Complete Scottish Gaelic book (the Kindle edition of which was on offer for £0.99 yesterday!), using Duolingo, Memrise, and a couple of other resources to supplement this. I’d think I’d be able to have a basic conversation about myself on the 18th, with hopefully 100-250 words under my belt.

What resources am I using?

These are the ones I gathered together:

There are some other links but right now, I’m really just trying everything out, so I’ll add those into the next post.

I think that’s it for now; I’ll post again on the 6th with how it’s been going so far—and I hope everyone else has had a fun first couple of days in 2020!

There was an error retrieving images from Instagram. An attempt will be remade in a few minutes.