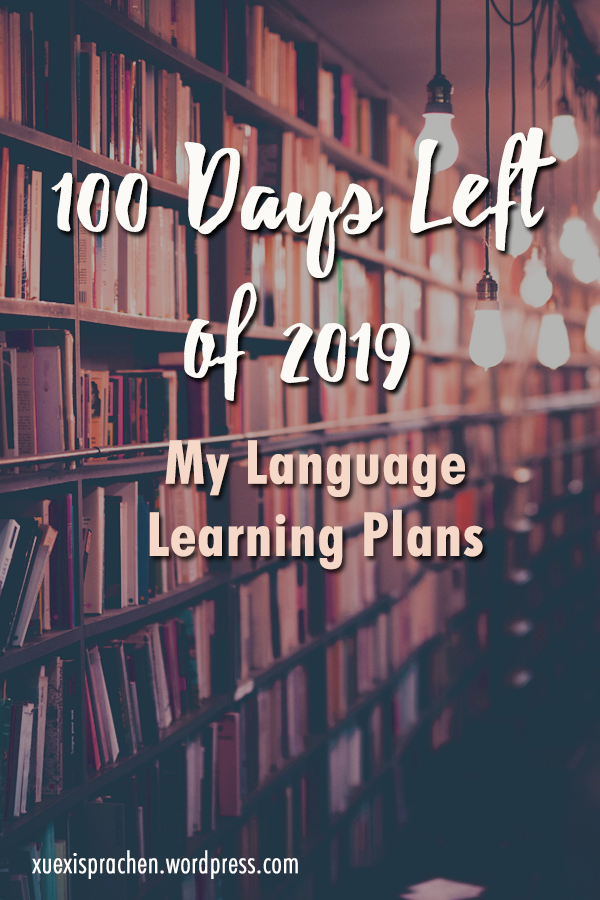 There are only 100 days left in 2019, whaaat?! That in mind, I thought it might be a good idea to set myself some goals for my language learning—though I’m going to have to watch out for how busy this part of the year gets! END_OF_DOCUMENT_TOKEN_TO_BE_REPLACED

First of all, I hope everyone has had a lovely holiday – however you celebrate or don’t celebrate. There’s snow here now, which is amazing; we’ve not had snow in ages. It also gives me the excuse to stay inside and get some studying done. 😉

I also have some non-Spanish related news: I finally finished Harry Potter und der Orden des Phönix! It’s over 1000 pages long in German (around 900 in Spanish, apparently), so it’s taken me since about the end of August to read it – which while that’s been four months, it’s not too bad, all things considered. I’m halfway through Flammender Zorn (Mockingjay) so I’m going to finish that before I go onto the next Harry Potter.

Spanish-wise, I’ve been making some progress. I’ve done a bit more FSI – but at this point it’s mostly pronunciation drills so it’s booooooooring. I do need to work on Assimil. I’m hoping I’ll get on that – mostly because my Kindle died a few weeks ago (it was an incredibly sad moment) but my aunt had a Kindle Fire she wasn’t using anymore so she gave it to me (which was an amazing moment) and I’ve found that in general, the Kindle Fire is much, much better when it comes to displaying PDFs. I’ve put a lot of my language books on there – and the audio files on my iPod – with the hope that I’ll be much more likely to use them on my commutes next year!

END_OF_DOCUMENT_TOKEN_TO_BE_REPLACED

It’s been a whirlwind these last two weeks, but I’ve tried to fit in Spanish whenever possible.

As I mentioned in the last post, I had relatives visiting from the 4th-9th December, so I didn’t really study then (though I managed to keep my streak up on memrise! I only messed that up this past weekend…). The rest of that week I spent trying to catch up on lesson planning and everything else that had been neglected; and then last weekend I went to visit friends. So this time hasn’t been as productive as it could have been so far.

However, I’m not letting it bother me. I guess a part of me didn’t really think about how busy December is as a month, but I’d rather have started this on the 1st December and be a month in by the time the new year rolls around than be starting on the 1st January, having done nothing in December. I guess for this month, my main goal is going to have to be to ease myself back into Spanish by doing what I can, when I can. It’s a good goal and I’m not going to pressure myself about it.

The pressure can be ramped up after Christmas. 😉

But yeah, I just thought I’d check in. I also have started using a new resource – Glossika – so I’m going to see how that goes. Having things on my iPod is a lot easier due to the fact that I’m commuting four days a week, so I think that’s going to be my main focus for now.

We’re halfway through December already. How is everyone doing? Getting ready to wrap up for the end of 2014? Let me know! 🙂

How is everyone? Settling into December? Getting ready for Christmas/the end of the year?

The first three days of this challenge have been quite interesting – in that I seem to have had no time at all. However, I have managed to get some things done.

END_OF_DOCUMENT_TOKEN_TO_BE_REPLACED

I guess there’s no real reason for me to hold off on beginning until tomorrow, but I’d like to start with as clean a slate as possible, so I keep scouting out my Spanish resources but I’m trying not to use them.

To take my mind off this (although I could be studying something else or actually doing some work…) I thought it might be a good idea to write out a list of the resources I’ll be using for this challenge. More or less everything I’m using is free – because I don’t like to spend too much money, even if I’m not a student anymore. 😉

So, without further ado…